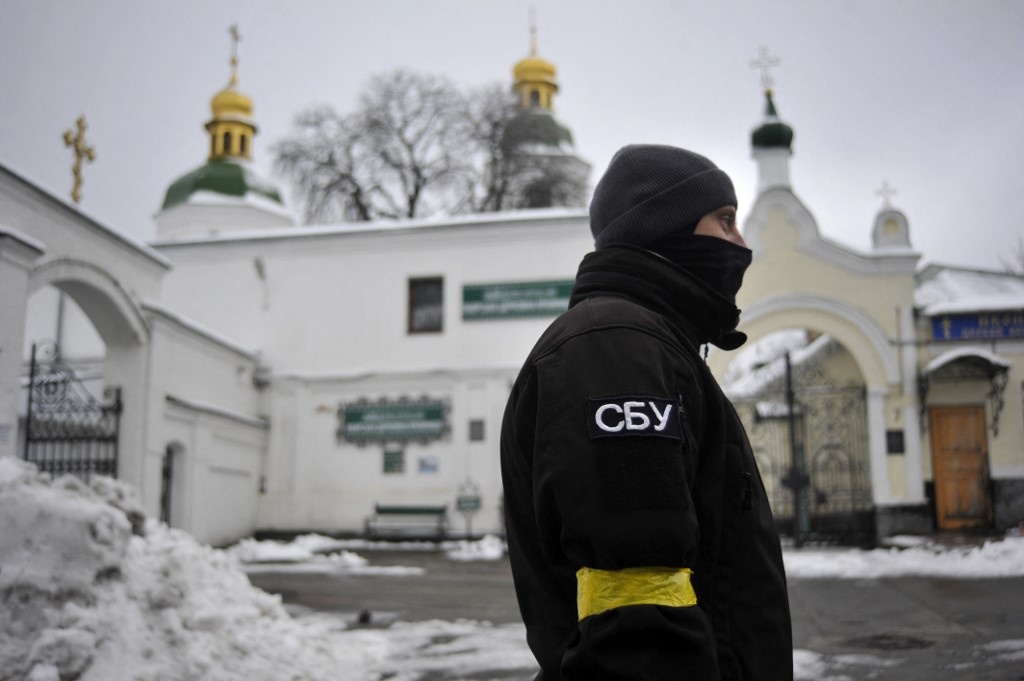 
In what promises to be a widening of the hybrid war front, the Security Service of Ukraine (SBU) has carried out a raid on Kyiv’s most historic Orthodox monastery over the suspected “activities” of Russian agents who may be present on its grounds.

The SBU said on Tuesday, Nov. 22 that “counter-intelligence measures” were carried out as part of work to “counter the subversive activities of the Russian security services in Ukraine.”

It added that Kyiv aimed to prevent the use of the site as a “center of the ‘Russian world’” and ensure the premises were not used to hide “sabotage and intelligence groups” and to store weapons, AFP reports.

A police car was parked outside the monastery complex this morning, according to AFP, its rooftops and glistening golden domes covered with snow.

Armed officers were seen carrying out ID checks and searching the bags of worshippers before letting them go inside.

Located south of downtown Kyiv, the 11th century Kyiv-Pechersk Lavra, or Monastery of the Caves, is a UNESCO World Heritage site and is located within the National Kyiv-Pechersk Historical and Cultural Reserve. For centuries it was perhaps the most important pilgrimage destination for Orthodox faithful throughout Russian Empire.

Even before Moscow took jurisdiction of the Orthodox Church in Kyiv in 1686 – previously governed by the Patriarchate of Constantinople – the complex of churches and caves built into a bluff above the Dnipro River was coveted by numerous tsars, who considered the site to be the cradle of their Christian civilization.

Today the Pechersk Lavra is the focal point of a simmering conflict between Moscow and Kyiv playing itself out in church politics, with the Orthodox Church of Ukraine (OCU) of the Kyiv Patriarchate pitted against the Ukrainian Orthodox Church (UOC) loyal to the Moscow Patriarchate.

The monastery is currently controlled by the Moscow Patriarchate, and Ukrainian nationalists have been eager to pull it away from Russian domination along with the rest of the country

The process of creating a self-governing Orthodox Church inside Ukraine, one separate from Moscow, began after independence in 1991. It gained momentum when the current Ecumenical Patriarch of Constantinople, Bartholomew I, recognized the OCU’s canonical status in 2019, much to the chagrin of Moscow. Since then there has been a veritable rift among the Orthodox faithful worldwide.

Speaking in Moscow, Vladimir Legoyda, a spokesman for the Russian Orthodox Church (ROC) called the raid an “act of intimidation” against Ukrainian believers.

“We pray for our fellow believers… who are becoming victims of lawlessness and we call on all sympathetic people to do everything possible to stop this persecution,” he said on social media.

Since the beginning of Russia’s full-scale invasion of Ukraine on Feb. 24, the ROC has been a vocal supporter of what the Kremlin insists on calling a “special military operation” in Ukraine, with its Moscow-based head Patriarch Kirill saying in April that Russia was a “peace-loving” country that had suffered greatly from war.

Kirill, a very close ally of Vladimir Putin, added: “We absolutely do not strive for war or to do anything that could harm others.

“But we have been raised throughout our history to love our fatherland. And we will be ready to protect it, as only Russians can defend their country.”

Kirill has since been roundly criticized by Orthodox hierarchs all over the world.

In Ukraine, Kirill has long been considered to be a former KGB collaborator whose allegiance merely adapted to the post-Soviet reality – the transformation of the KGB into the FSB. Numerous reports over the years, based on Soviet archival material, reveal both Kirill and his predecessor, Alexy, to have been agents for the Soviet or Russian security services. Indeed, the Orthodox Church ruled from Moscow has traditionally been accepted as an appendage of imperial power with a messianic veneer.

Kirill’s comments prompted the UOC (Moscow Patriarchate) to ostensibly end ties with its Russian counterpart in May, although doubts persist as to the extent of any divorce.

In a separate statement, the SBU confirmed that “security measures” were carried out at two monasteries and the local diocese in Rivne Region, northwestern Ukraine.

The raids on Nov. 22 will further inflame already tense relations between the Moscow and Kyiv Patriarchates.

Thus far, President Volodymyr Zelensky has been seen as not wanting to exacerbate religious tensions that would further destabilize Ukraine. Indeed, many of his critics even accused the SBU of suppressing attempts on the part of the Kyiv Patriarchate to confiscate property from what they deem to be a collaborationist church (i.e., the Moscow Patriarchate).

Russia has been losing influence among Ukrainian Orthodox believers since 2019, when Patriarch Bartholomew of Constantinople conferred canonical status to the OCU (Kyivan Patriarchate). This has led to many parishes belonging to the UOC (Moscow Patriarchate) to join the OCU. Many more such defections are expected as the dust of the ongoing war settles.