A Russian woman who harassed Ukrainian women on the streets of Germany and Austria has been permanently expelled from the country, it was confirmed on Nov. 21, 2022.

A video of Yulia Prokhorova being escorted by German police officers was posted on Twitter on Nov. 21 by Visegrad 24, a news source that provides 24/7 updates from Ukraine.

The news outlet also wrote in the tweet: “Great news! Yulia Prokhorova, the Russian woman who kept harassing Ukrainian refugees on the streets of Germany and Austria has finally been deported from Germany after all,” adding, “No more Europe for you, Yulia.”

Back in August, Julia Prokhorova was caught on camera mocking and harassing Ukrainian women on the streets of Salzburg, Austria. Her actions sparked outrage in Ukraine and on social media, where the video went viral.

In the video Prokhorova said to the two women: “Glory to Russia!” continuing, “Russia will win, Russia will win.” She then asked them, “Who owns Kherson?” referring to the city that was under Russian occupation in Eastern Ukraine.

The two harassed women spoke back to Prokhorova, stating “Kherson belongs to Ukraine.”

“Ukraine? Yeah, sure. But now they will hold a referendum! F*** off with your Ukraine!”  Prokhorova bellowed in a combative tone. Her Telegram account was later deactivated.

She was subsequently investigated by authorities in Bavaria, where she was living, when the video went viral. She claimed online that she was residing there illegally.

The Brussels Times news outlet has claimed that she had bragged on her Telegram account about her upcoming vacation to Vienna, which she had paid for in Russian rubles using a payment method from a Russian bank that had been blacklisted on a reservation app.

However, after the video of her behavior gained negative widespread attention on social media in early August, the travel agency immediately cancelled her reservation.

Numerous social media users also called for her deportation in response to her actions and behavior towards the Ukrainian migrants, which they have criticized as inappropriate.

Since the news of Prokhorova’s deportation, many users on social media have praised the German authorities decision to remove her from the country.

When Visegrad 24 news outlet reported on her deportation on Twitter, a user named @AmarmendD tweeted in response on Nov. 20, “100 percent right action has taken.”

Another Twitter user named @worldofwarby responded to the news, stating “Bye bye. Don’t come back please. Shut the door on your way out. Enjoy Mother Russia and a massive slice of karma…”

One user also responded “Good Riddance! No more harassment by a Russian Woman on Ukrainians.”

EU citizens have asked that Russians be barred from entering EU countries due to similar inappropriate behavior by other Russians in the past.Kaja Kallas, the prime minister of Estonia, stated on Twitter on Aug. 9 that Russian tourists should no longer travel to the EU. Sanna Marin, the prime minister of Finland, made similar remarks.The Estonian government declared that starting on Aug. 18, it would no longer issue visas to Russian citizens.

In an exclusive interview with the Washington Post published back on Aug. 8, President Volodymyr Zelensky criticized Western nations for not being strict enough on Moscow. He argued that they should impose retaliatory measures and, most pertinently, make it virtually impossible for Russians to leave the nation. 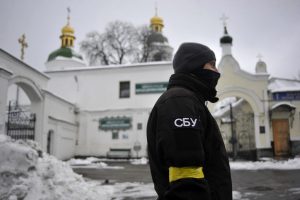