American General Mark Milley, who is also Chairman of the Joint Chiefs of Staff, has cautioned that Russia still had substantial combat capability inside Ukraine despite suffering recent defeats on the battleground. He noted that the chances of an outright military victory for Ukraine in the near-term were not high.

At a news conference in the Pentagon, Milley said: “The probability of a Ukrainian military victory – defined as kicking the Russians out of all of Ukraine to include what they claim as Crimea – the probability of that happening anytime soon is not high, militarily.”

At the same event, U.S. Defense Secretary Lloyd Austin echoed Milley’s declaration that the US would aid Ukraine in self-defense for however much would be needed.

“Politically, there may be a political solution where, politically, the Russians withdraw. That’s possible,” he continued, saying Russia “right now is on its back.”

Milley and Austin spoke to the media after a virtual meeting between a large number of defence ministers.

“Ukraine will continue to endure. Ukraine is not going to back down,” Milley said, adding that Ukraine was free, “and they want to remain free.”

Military to military communication with the Kremlin during the nine-month war has been emphasized by the Pentagon. After the Kremlin accused Ukraine of preparing a “dirty bomb” attack, Austin and Milley both had conversations with their Russian counterparts in October.

After the latest deadly cruise missile strike on Ukraine on Tuesday, Nov. 15, Milley

Russia was “imposing a terror campaign” on Ukraine through its attacks on communities and energy facilities.

“The deliberate targeting of the civilian power grid, causing excessive collateral damage, and unnecessary suffering on the civilian population is a war crime,” Milley underlined.

Ukraine has recently taken back territories it lost to Russian forces, including parts of Kharkiv Region and notably the southern port city of Kherson last week. 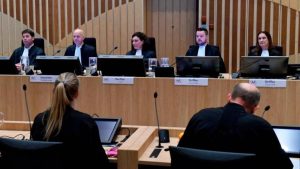