The Polish Ministry of Foreign Affairs said that a Russian-made rocket fell into the country on Tuesday afternoon. This is reported by “European truth”.

“On November 15, 2022, another multi-hour massive shelling by the armed forces of the Russian Federation of the entire territory of Ukraine and its critical infrastructure took place. At 15:40, a Russian-made rocket fell near the village of Przewoduv, Grubieszovsky district, Lublin voivodship, as a result of which two citizens of the Republic of Poland were killed,” – According to the message of the Polish Foreign Ministry, published late on Tuesday evening.

They added that in connection with the incident, Polish Foreign Minister Zbigniew Rau summoned the Russian ambassador to the Foreign Ministry demanding that he immediately provide detailed explanations.

Until now, Warsaw has not officially confirmed that it was a Russian missile that fell on its territory.

As you know, on Tuesday afternoon, Russia launched a massive missile attack on the territory of Ukraine, the missiles fell near the border with Poland. After that, Polish Prime Minister Mateusz Morawiecki urgently convened the Committee of the Council of Ministers on National Security and Defense.

Earlier, the AP news agency reported that US intelligence confirms that Russian missiles crossed Polish airspace on Tuesday, killing two people. But the Pentagon has not officially confirmed this version.

The Russian Ministry of Defense stated that it “has nothing to do” with the alleged fall of missiles on the territory of Poland.

The Polish government decided to increase the combat readiness of some military units after the explosion, and also to consider the possibility of invoking Article 4 of the NATO Treaty.

Previous post Against the backdrop of the war in Ukraine, cooperation with Georgia becomes even more important 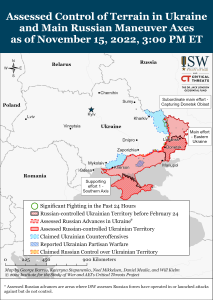