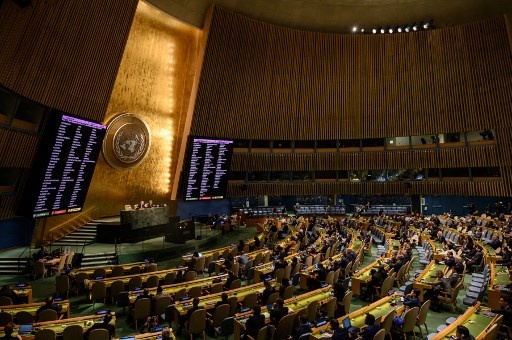 
The UN General Assembly adopted Monday, Nov. 14, a resolution supporting a mechanism for Russia to pay reparations for human and property destruction from its invasion of Ukraine.

The resolution, which is non-binding, calls for creation of a framework for Russian reparations for the war which began on February 24 and has left well over 200,000 people on both sides dead or injured, according to US estimates.

Referring to the invasion of Ukraine, it said Russia “must bear the legal consequences of all of its internationally wrongful acts, including making reparation for the injury, including any damage, caused by such acts.”

It also called for the creation of a formal register of damage incurred by Ukraine and Ukrainians in the war and caused by Russia.

The assembly voted 94-14 as it passed the resolution, while 63 countries abstained.

That was well short of the 143 countries voting in favor of a resolution on October 12 to condemn Russia for the “illegal annexation” of Ukrainian territory.

In that vote, five opposed the document and 35 abstained.

The resolution approved Monday was sponsored by Ukraine, Canada, the Netherlands and Guatemala.

Many countries in Africa abstained, as did Brazil, India and Israel.

Before the General Assembly, Ukraine’s envoy Sergiy Kyslytsya argued there was a precedent for reparations: the $52.4 billion Iraq had to pay for damage from its 1990 failed takeover of Kuwait.

That was overseen by a UN body created specifically for the case, the UN Compensation Commission.

The passage of the resolution Monday is only a partial step toward creating a reparations mechanism for Ukraine.

But it could eventually lead to Kyiv making claims on the hundreds of billions of dollars worth of Russian assets frozen by the United States and European allies since the beginning of the war.

“People around the world are watching helplessly as innocent civilians are killed as a result of deliberate targeting, as infrastructure, hospitals, schools, homes are destroyed every day. Destruction is overwhelming,” the European Union delegation to the UN said in a supporting statement.

“There is no question of whether Russia should pay, but rather of when it will pay and what amount,” it added.

Moscow’s UN envoy Vassily Nebenzia accused Ukraine and its Western backers of seeking a justification to seize the frozen assets to use “to prolong and further aggravate the conflict.” 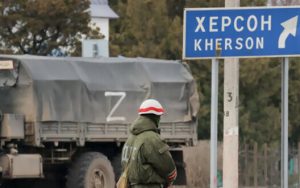 Previous post Russians are not going to leave rest of occupied Ukraine. There will be heavy battles – Pentagon 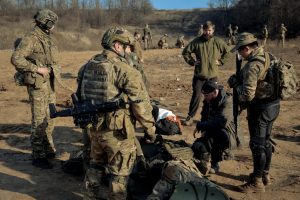