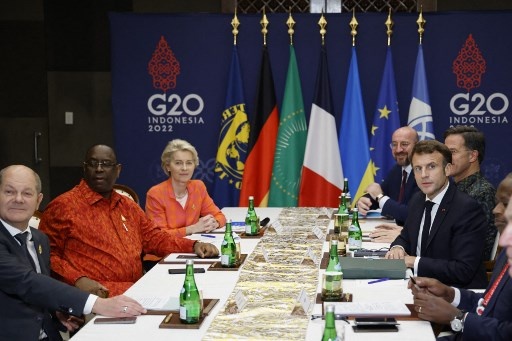 A draft communique obtained by AFP showed the world’s 20 leading economies coming together to condemn the war’s effects, but still divided on apportioning blame.

The summit has shown that even Russia’s allies have limited patience with a conflict that has inflated food and energy prices worldwide and raised the spectre of nuclear war.

Risking diplomatic isolation, Russia was forced to agree that the “war in Ukraine” — which Moscow refuses to call a war — has “adversely impacted the global economy”.

It also agreed that “the use or threat of use of nuclear weapons” is “inadmissible”, after months of President Vladimir Putin making such threats.

The embattled Russian leader has skipped the summit, staying at home to reckon with a string of embarrassing battlefield defeats and a grinding campaign that threatens the future of his regime.

Zelensky told leaders from China’s Xi Jinping to America’s Joe Biden that they could “save thousands of lives” by pressing for a Russian withdrawal.

“I am convinced now is the time when the Russian destructive war must and can be stopped,” he said, sporting his now-trademark army-green T-shirt.

His most notable diplomatic victory was an acknowledgement in the communique that while “most members” of the G20 condemned Putin’s invasion, “there were other views and different assessments”.

“All problems are with the Ukrainian side, which is categorically refusing negotiations and putting forward conditions that are obviously unrealistic,” Lavrov told reporters.

Leaders must now sign off on the final text before the summit ends on Wednesday.

The United States and its allies used the summit to broaden the coalition against Russia’s invasion and scotch Moscow’s claims of a war of East versus West.

Many “see Russia’s war in Ukraine as the root source of immense economic and humanitarian suffering in the world”, said a senior US official.

But it gives a growing sense of the worldwide impact of the war.

G20 members Argentina and Turkey are among the nations worst hit by food inflation worldwide, but there was scarcely a country around the table unaffected.

“In the northern hemisphere the merchants of death broker lethal arms sales, but in the southern hemisphere food is costly or scarce — what kills are not bullets or missiles, but poverty and hunger.”

There was also a hint at growing Chinese unease with Russia’s prosecution of the war when presidents Xi and Biden met late Monday.

“It’s clear that the Russians are very isolated,” said one Western official. “I think some countries engaged with Russia but… I did not see any gestures of great solidarity.”

A deal expiring Saturday that allows Ukraine to export grain through the Black Sea is a focus of summit conversations, with leaders expected to urge its “full, timely and continued implementation”.

Ukraine is one of the world’s top grain producers, and the Russian invasion blocked 20 million tonnes of grain in its ports before the United Nations and Turkey brokered the deal in July.

The summit build-up focused heavily on Xi, who is making only his second overseas trip since the pandemic began and has stolen the spotlight as leaders line up to speak with him.

Xi and Biden cooled Cold War rhetoric during three hours of talks on Monday, taking some of the heat out of their simmering rivalry.

“The world expects that China and the United States will properly handle the relationship,” Xi told Biden.

“We should beware of prematurely declaring the strategic rivalry over. However, we saw a deliberate effort to stabilise a dangerously overheated relationship.”