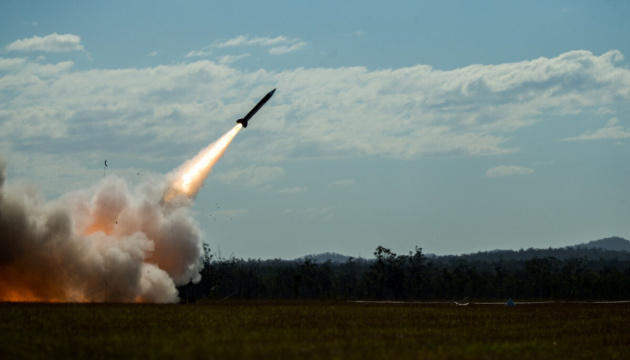 
The Kremlin launched a punishing new wave of missile strikes at the Ukrainian power grid on Monday, Nov 15, knocking out power across the country. It was the single most massive attack against Ukrainian infrastructure since the start of the war.

President Volodymyr Zelensky in a statement said 85 missiles were launched and that as many as 20 more might be fired. Air defense units in the central Vinnitsya district saw as many as ten missiles flying in close formation at a time, as they headed to targets further north, news reports said.

Two missiles reportedly struck in Kyiv’s central Pechersk district. Images from Kyiv showed an apartment building burning, possibly from flammable fuel spread on the side of the structure.  The Telekanal Kyiv station aired an interview of an eyewitness to the strike saying the missile “went straight for the apartment building.”

Kyiv Mayor Vitaly Klitschko said one person died in the strike. Speaking to reporters, he said city housing had been hit and power grid infrastructure damaged.

Much of the city was without electricity by 5:00 p.m., Kyiv Post found, based on multiple phone calls and reporter observation in most of the capital’s districts. There were, however, districts where the power stayed on, among them the city’s central Khreschatyk region, and the outlying Brovary neighborhood, a central target for Russian missile attacks two weeks ago.

The city Metro transit system continued operating throughout the strikes, a Kyiv Post reporter confirmed. At 6:00 p.m., Metro officials announced the system’s red line would be shut down.

In early October, Russian President Vladimir Putin announced Russia would bring Ukraine to the negotiating table by destroying its power grid and forcing Ukrainians to sit in cold, dark apartments. Since then the Kremlin has launched missile strikes, usually on a Monday, mostly targeting power substations.

Ukrainian national power grid authorities DTEK ordered an emergency switch off plan put into operation, to prevent grid overload. The decision left sections of the city, and even distant regions without power or in some cases water service.

At least three explosions were heard in the northeastern city of Kharkiv. Power surges were reported and the city Metro transit system was shut down. Images from Dnipro showed pieces of a missile lying in an apartment courtyard.

Two explosions were reported in northern Zhytomyr, by reports one of the worst-hit targets. Power and water shut down across much of the city, and emergency response teams were working to repair the damage, a statement from the mayor’s office said.  In the western city of Lviv, following a pair of strikes, 80 percent of the city was without power a mayor’s office statement said.

Air defense units in the northeastern Sumy region claimed one missile shot down. Widely shared video showed a missile shot down over Kyiv. According an interior ministry statement, falling debris from an anti-aircraft missile struck an apartment building near Druzhby Narodiv (Friendship of Nations) Boulevard, a main thoroughfare in the capital. Air defense units in the central Khmelnitsky region opened fire, but results were not reported.

Previous post “History does not give one chance twice”