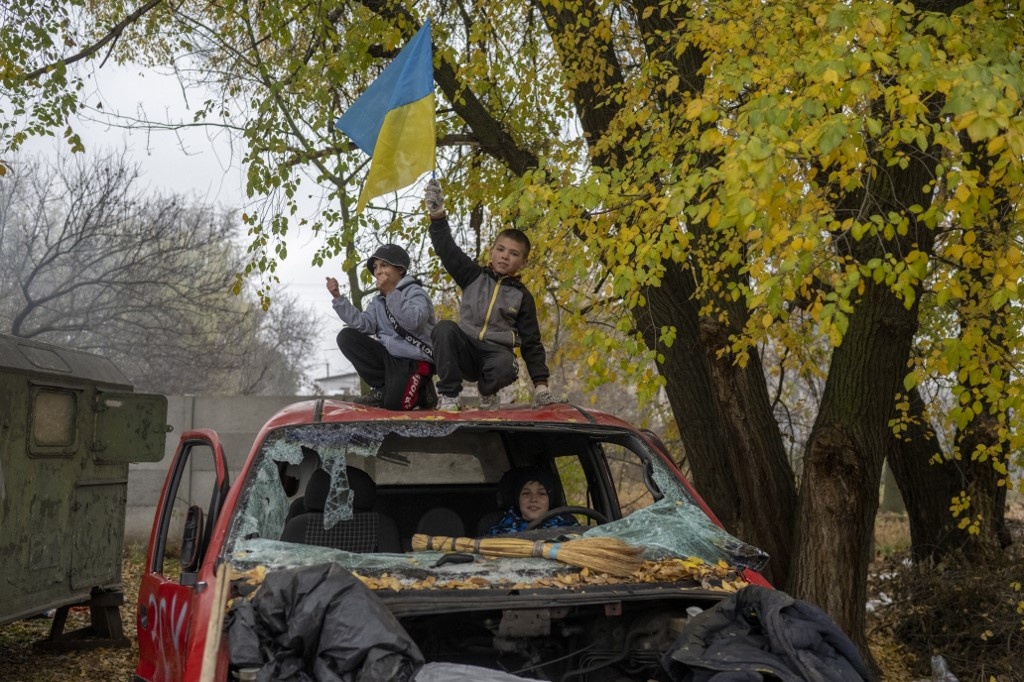 
After a weekend of jubilant celebration, residents of newly-liberated Kherson are beginning the monumental task of restoring their lives to some level of normality.

The task ahead is huge, requiring not just the rebuilding of their homes, but the documentation of war crimes, the settling of scores and dealing with the threat that nearby Russian forces continue to pose.

The most immediate concern for those living in Kherson is the resumption of the electricity and water supply, cut off when Russian forces destroyed critical infrastructure as they fled last week.

Local authorities are racing to fix it, but currently residents lack power and heating with temperatures forecast to drop below freezing overnight later this week.

Communications are also severely limited with the only internet access currently being provided by Starlink terminals brought in by the Ukrainian military.

The continuing threat from Russia

Russian troops may have left the city of Kherson itself, but they have not gone far and still threaten the area from the left bank of the Dnipro River.

Even as huge crowds of people gathered in the center of Kherson to celebrate liberation, artillery exchanges between Russian and Ukrainian forces could still be heard.

The Southern Command of the Armed Forces of Ukraine said on Monday, Nov. 14, that Russian forces continued to “inflict fire damage on our troops and de-occupied settlements along the right bank of the Dnipro”.

A curfew lasting from 5pm to 8am is in place, and people are banned from leaving or entering the city.

The threat of Russian heavy bombardment with missiles and drones persists.

Ukrainian officials have warned of the threat from Russian mines and urged residents to avoid the city centre area so that demining operations can be undertaken.

In his daily evening address on the evening of Sunday, Nov. 13, President Volodymyr Zelensky, said: “I am asking you please not to forget that the situation in Kherson Region remains very dangerous.”

Ukraine and the wider world have learned the hard way that the joy of liberation is inevitably followed by the grief and sorrow of learning of the war crimes and atrocities committed by Russian soldiers in the areas they have occupied. They occupied Kherson and Kherson Region in the first days of the war.

Zelensky said on Sunday, Nov. 13, that investigators had already documented “more than 400 Russian war crimes”, adding: “Bodies of dead civilians and servicemen have been found.

“The Russian army left behind the same savagery it did in other regions of the country it entered.”

Zelensky’s claim has not yet been independently verified but evidence of atrocities in  Kherson Region would fit a well-established pattern already seen in liberated areas of Ukraine such as Bucha in April and Kharkiv Region at the end of the summer.

In October a United Nations (UN) report found Russia was responsible for the “vast majority” of war crimes in Ukraine, documenting numerous cases of summary executions, torture, rape, and other sexual violence committed in areas occupied by Russian troops.

A delicate and potentially explosive aspect of liberation is holding to account those Ukrainians who collaborated with Russian forces during occupation.

While many will have fled the city with Russian forces, there are reports of alleged vigilante justice being meted out to those suspected of assisting the occupiers.

Visiting a market in Kherson at the weekend, the BBC’s Jeremy Bowen said traders were “furious” about collaborators and were pointing out those they said had helped the Russians.

The return of looted items

There is widespread evidence of Russians looting homes, cultural centres and even a zoo as they fled Kherson.

Last month Zelensky said Russian forces were taking huge amounts of medical equipment and ambulances in an attempt to make Kherson Region a “no man’s land” incapable of supporting the local population.

He added: “The occupiers have decided to close down medical institutions in towns, take away medical equipment, ambulances, everything. They are putting pressure on doctors who still remain… to move to the territory of Russia.”

Since then further evidence has emerged of soldiers looting museums and homes and in one bizarre video, soldiers appear to have taken a raccoon from a zoo, prompting a flurry of internet memes lampooning the Russian military.