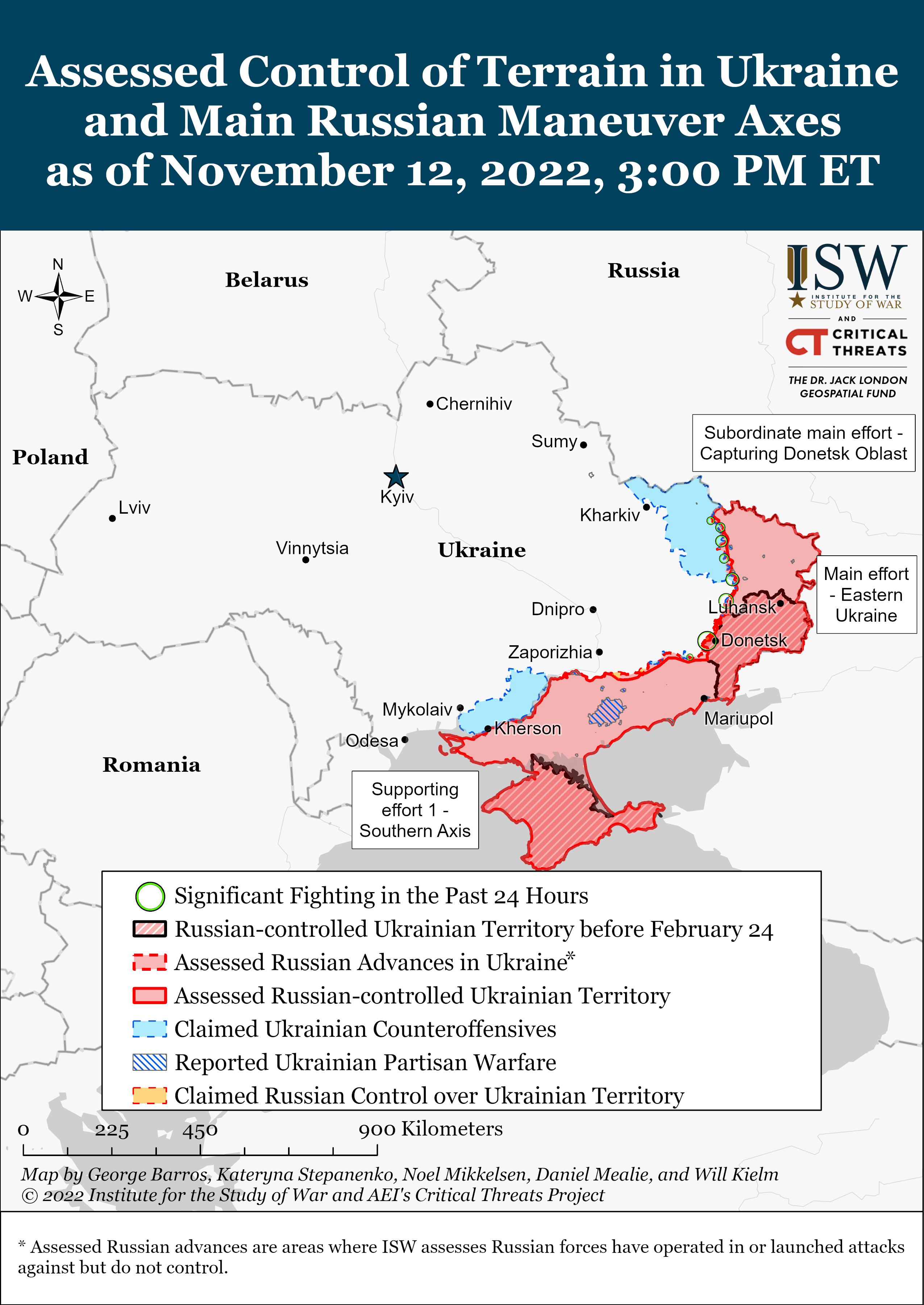 Russia’s withdrawal from Kherson City is igniting an ideological fracture between pro-war figures and Russian President Vladimir Putin, eroding confidence in Putin’s commitment and ability to deliver his war promises. A pro-war Russian ideologist, Alexander Dugin, openly criticized Putin—whom he referred to as the autocrat—for failing to uphold Russian ideology by surrendering Kherson City on November 12.[1] Dugin said this Russian ideology defines Russia’s responsibility to defend “Russian cities” such as Kherson, Belgorod, Kursk, Donetsk, and Simferopol. Dugin noted that an autocrat has a responsibility to save his nation all by himself or face the fate of “king of the rains,” a reference to Sir James Frazer’s The Golden Bough in which a king was killed because he was unable to deliver rain amidst a drought. Dugin also downplayed the role of Putin’s advisors in failing to protect the Russian world and noted that the commander of Russian Forces in Ukraine, Army General Sergey Surovikin was not responsible for the political decision to withdraw from Kherson City. Dugin noted that the autocrat cannot repair this deviation from ideology merely with public appearances, noting that “the authorities in Russia cannot surrender anything else” and that “the limit has been reached.” He also accused the presidential administration of upholding a “fake” ideology because of its fear of committing to the “Russian Idea.” Dugin also made a reference to the use of tactical nuclear weapons, which he vaguely stated was “the end” and proceeded to note that overdue Russian changes to the military campaign have not generated any effect to change the course of the war.  He also suggested, however, that Russia must commit to the Russian Idea rather than pursuing the “stupid” use of nuclear weapons.

Putin is having a harder time appeasing parts of the highly ideological pro-war constituency due to his military’s inability to deliver his maximalist goals of overthrowing the Ukrainian government and seizing all of Ukraine, as ISW has previously assessed.[2] Putin’s nationalist-leaning propagandists such as Vladimir Solovyov are increasingly demanding that the Kremlin and higher military command to fully commit to their goals in Ukraine, and Solovyov even called for full mobilization and the firing of incompetent officials following the Russian surrender of Kherson City.[3] Select milbloggers have previously criticized Putin for his failure to respond to the attack on the Kerch Strait Bridge on October 9, while others noted that Putin has failed to uphold the ideology of Russian superiority since 2014.[4] Direct criticism of Putin within the pro-war community is almost unprecedented, and Dugin’s high-profile and unhinged attack on Putin may indicate a shift among the Russian nationalist ideologues.[5] Putin needs to retain the support of this community and has likely ordered some of his propagandists to suppress any critiques of the Russian withdrawal from Kherson City, since many state TV news programs have been omitting or downplaying the aftermath of withdrawal.[6] The ever-increasing doubts among extreme Russian nationalists about Putin’s commitment to Russian ideology reduce Putin’s appeal to the nationalist community, while mobilization and high casualties will likely continue to upset members of Russian society.

Wagner-affiliated channels are also turning on the Kremlin following the loss of Kherson Oblast, which may further elevate the influence of the siloviki faction. Some milbloggers implied that the Kremlin has betrayed Kherson City by “selling out,” while others noted that the Kremlin has consistently surrendered its territories without asking the Russian people.[7] Other milbloggers further questioned the legitimacy of the claimed 87% support rate for the Russian annexation of Kherson Oblast.[8] Wagner Group financier Yevheny Prigozhin and some milbloggers have previously discussed the possibility of “Russia’s civil society” stepping up to defend Russia.[9] The growing criticism of the decision to withdraw from western Kherson contrasts with the general support for the decision among the milblogger community before today.

Russian military leadership is trying and largely failing to integrate combat forces drawn from many different organizations and of many different types and levels of skill and equipment into a more cohesive fighting force in Ukraine. The Ukrainian General Staff reported that Russian officials stopped the distribution of Donetsk People’s Republic (DNR) and Luhansk People’s Republic (LNR) documents, including documents regarding the participation of DNR and LNR forces in combat, on November 11.[16] Russian authorities also ordered Southern Military District commanders to centralize payments to DNR and LNR fighters through Russian financial institutions and offered DNR and LNR soldiers the option to continue their service as contract servicemembers under Russian law.[17]  These efforts will likely increase friction between Russian officials and LNR and DNR officials due to the exclusion of DNR and LNR officials from the process. DNR and LNR servicemembers reportedly feel pressured to accept Russian contracts and have expressed fears that refusal of the new Russian contracts would lead to the annulment of their documents and termination of DNR/LNR benefits.[18] ISW has previously reported bureaucratic conflict between DNR, LNR, and Russian authorities over administrative structures in occupied areas.[19] 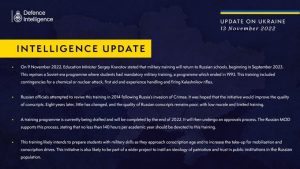 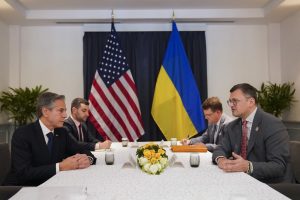