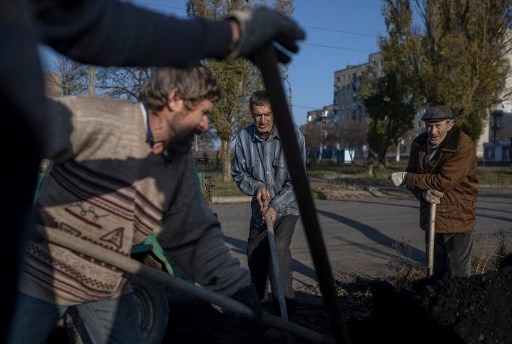 
In a supermarket car park in Bakhmut, the eastern Ukrainian city at the centre of the fighting for the Donbas region, Anatoliy is rushing to load up his truck with coal for him and his neighbours, determined to stay dug in for the winter.

Around half of Bakhmut’s 70,000 people have stayed on despite the fighting raging for the past four months, mostly in the east of the city.

“The fact that we are still here and helping others, that means a lot to us,” says Anatoliy, a 60-year-old man with a white beard and a beanie.

“We aren’t just going to stay here and do nothing. We cannot survive on our own,” Anatoliy adds, still shovelling.

Behind him, cars with trailers are coming and going to pick up the coal that authorities have piled up to help residents ahead of the cold winter.

A big bag of toilet paper, a box of candles and bottles of water are packed on the passenger seat of a Soviet-era Lada car.

Locals are allowed to pick up two tons of coal per household.

This means a lot in a city with no electricity or running water since mid-October.

Already there is almost no coal left in the six piles, and shovels scrape against concrete paving.

But this noise barely covers the endless explosions of shelling between Ukrainian forces defending the city and Russian troops boosted by Wagner mercenaries.

When Russia invaded in February “we still had emotions, but now, we are just surviving,” Anatoliy says.

“We are giving humanitarian aid. I have a house, I have bees, and anything I can harvest in my garden, I give it to people for free,” he says.

“If someone needs carrots, cabbages or beetroots, they can take it… I don’t need much, so long as it can help people survive,” Anatoliy says.

“These days, we think about others more than we used to.”

Very few residents risk wandering through the streets, only nipping out to buy food at a small street market in the centre or at the grocery stores that remain open.

Every day, shelling hits the city itself.

At the end of October, a Russian strike killed seven people in Bakhmut.

There are very few children left in the city.

One of them, 12-year-old Sasha, just bought some lemonade and is on his way back home.

“A missile fell here. One person died,” he says, pointing to one of the entrances to his block of flats, before going back inside.

Artillery exchanges mostly occur in the outskirts of Bakhmut.

The contact line in the eastern suburbs has barely moved in the past four weeks, despite fierce fighting and heavy losses.

“It has become harder these past three days. (The Russians) are pushing more and more. But our boys are holding their positions,” 26-year-old soldier Vitaliy tells AFP.

The soldier is standing next to two combat vehicles in a sheltered spot in the city centre.

The unit has just been ordered to move one of the vehicles to the front line to fire at a Russian position.

The brigade comes back 15 minutes later, its task fulfilled.

The unit chief gets out of the armoured vehicle red-faced and takes big gulps of water from a bottle.

The Russians “came in, and we pushed them back. And now, we are shooting (at their positions) 2 kilometres (1.2 miles) away from the city,” he explains.

“So, long story short: we are winning,” he grins. 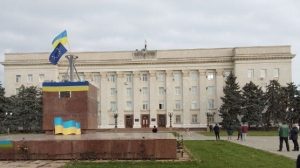 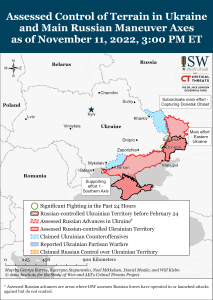