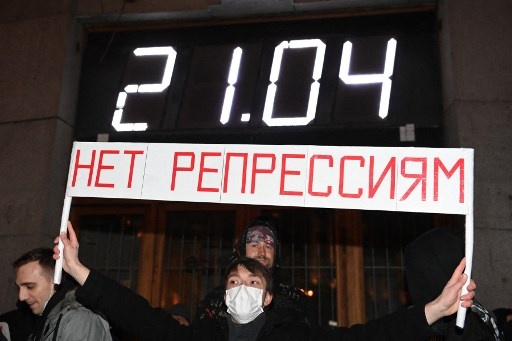 
An opposition supporter holds a banner reading “No repressions!” during a rally in support of jailed Kremlin critic Alexei Navalny, in central Moscow on April 21, 2021.

Samizdat (self-publishing) is the term used throughout the Eastern Bloc during the Soviet era for the distribution of unlawful articles that were frequently typed or written by hand and passed from reader to reader in order to get through the Russian authorities’ censorship.

According to the developers, Roskomnadzor, the Russian federal executive agency in charge of policing and censoring Russian mass media, is unable to block the application. It enables everyone inside Russia to read all news organizations’ investigations in a single location without the need for a VPN (virtual private network).

Notably, each team on Samizdat is in charge of its own publications: There is no common editorial policy or management. Also, the project’s developers have sent an email inviting additional independent journalists to participate.

Russian authorities have designated Bellingcat, The Insider, and Vazhnye istorii as “foreign agents.” Russia also views The Insider and Bellingcat as “undesirable organizations.”

In Russia, new laws were passed after the war broke out, allowing anyone to be labelled a “foreign agent.”