More than ten countries have already supported the training program for Ukrainian servicemen launched by the UK, British Ambassador Extraordinary and Plenipotentiary in Kyiv Melinda Simmons said in an exclusive interview with Interfax-Ukraine.

“The other result which I think is really significant is the number of countries who have supported the training programme. It’s up to eight countries at the moment, which is a fantastic alliance from Europe but New Zealand, Australia, the US, and Canada are also all part of it,” she said.

“Everyone can see the efficacy of it, everyone can see how responsive the Ukrainian troops are, who come and do that training. They soak it up in a way which is really quite inspiring. But also, they can see how quickly they can go through it,” the ambassador said.

“Training will continue until we reach that goal. And then there is already a conversation about how it can develop, including where else it can take place, and also more sophisticated levels of training. But for nailing that basic training for people who have not had that before, it’s really doing a good job,” Simmons said.

She said 6,000 people have already completed training for the Ukrainian military in the UK.

The British Ambassador drew attention to the fact that the United Kingdom is the second largest donor of support for Ukraine after the United States.

“We have provided air defence systems about 4 weeks ago. We’ve provided more artillery. We are looking all the time to see how existing stock can be adapted so that Ukrainians can use it to defend themselves against the latest wave of attacks. Mr. Wallace is very conscious about what’s needed,” she said.

“We provided NLAWs right from the beginning, which everyone saw, of course, arriving in Ukraine, and which the Armed Forces use so effectively. Since then we have provided anti-tank weapons etc. We’ve helped safeguard the Black Sea coast, provided underwater mine detectors etc. So, we just keep going in a way that it’s not just about the amount we give, but that what we give continues to be responsive,” she said.

In addition, Simmons drew attention to the fact that Britain is satisfied with the control it has over the range of assistance it provides to Ukraine.

“Yeah, I’m aware of the US concerns. I don’t have those concerns. We are happy with the controls that we have over the range of aid that we give. I don’t think we need anything else,” she said.

“But of course, the bigger priority right now is the work we’re doing to help keep the Black Sea open for the Grain Deal and help the Navy to defend itself right now. The provision of the right kit that helps do that is the higher priority. But the deal is still there,” Simmons said. 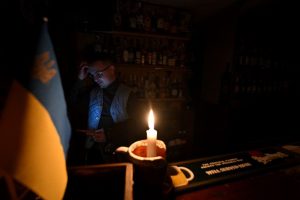