A summit of the Collective Security Treaty Organization (CSTO) is taking place in the Armenian capital Yerevan amid protests.

Last night, participants in a relatively small protest against Yerevan demanded the country’s withdrawal from the organization.

Today Minister of Foreign Affairs of the Russian Federation Sergey Lavrov arrived in Yerevan to participate in the summit.

The organization, whose charter states that an attack on one member is equal to an attack on all other members, unites Armenia, Russia, Belarus, Kazakhstan, Tajikistan and Kyrgyzstan.

As they say in Yerevan, despite the fact that Armenia has repeatedly applied to the organization with a request to respond to the Armenian-Azerbaijani armed conflict, the CSTO maintains a neutral position on the issue of the occupation of Armenian territories.

Part of the population of Armenia is dissatisfied with what is happening and demands to leave the CSTO.

Between the two members of the CSTO, Tajikistan and Kyrgyzstan, periodically there are armed border conflicts, as a result of which dozens of people are killed and injured. 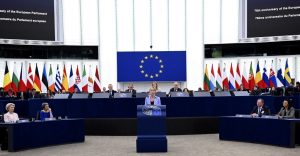