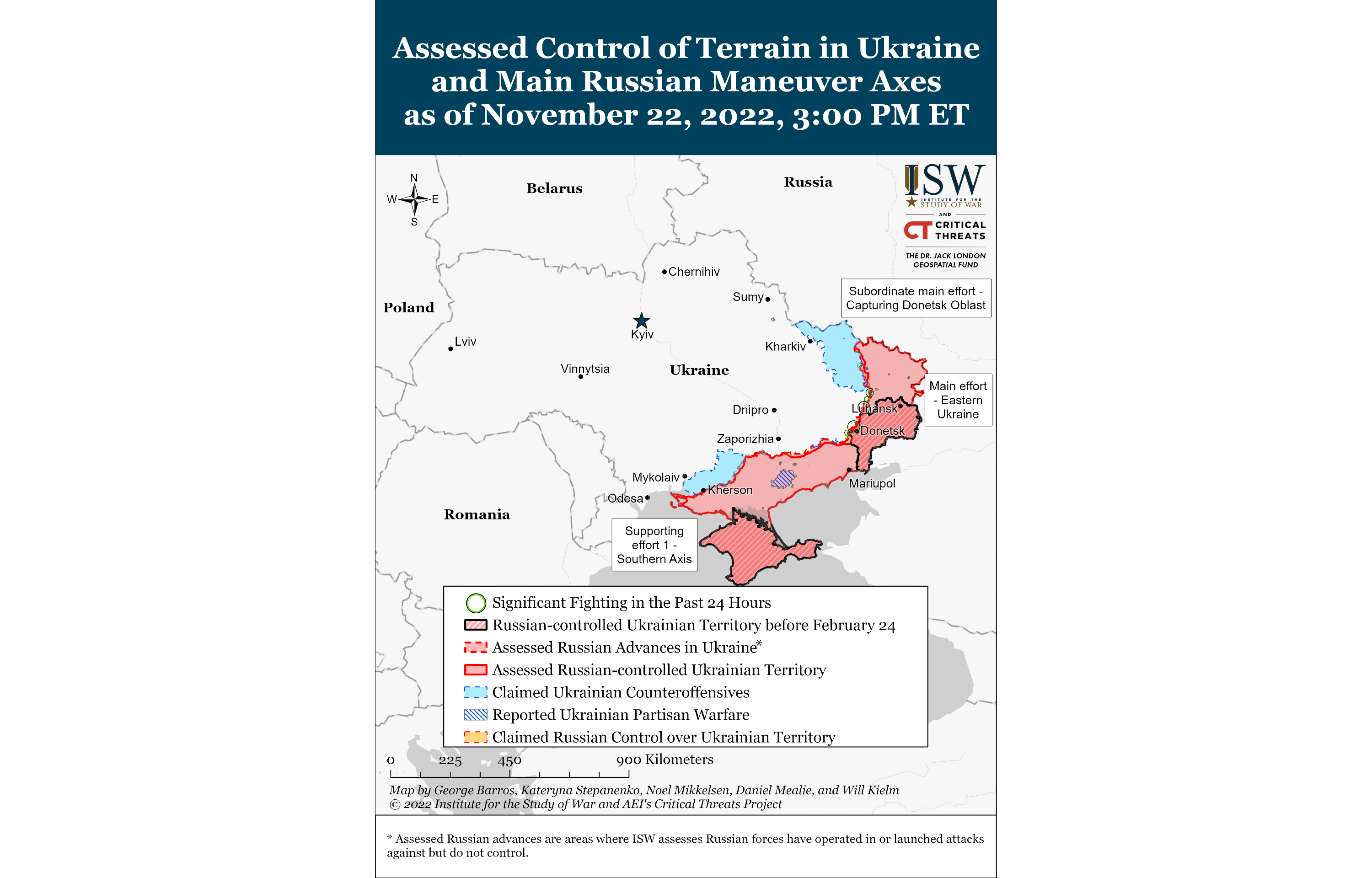 The Kremlin appears to be setting information conditions for a false-flag attack in Belgorod Oblast, Russia, likely in an effort to regain public support for the war in Ukraine. Kremlin propagandists have begun hypothesizing that Ukrainian forces seek to invade Belgorod Oblast, and other Russian sources noted that Russian forces need to regain control over Kupyansk, Kharkiv Oblast, to minimize the threat of a Ukrainian attack.[1] These claims have long circulated within the milblogger community, which had criticized the Russian military command for abandoning buffer positions in Vovchansk in northeastern Kharkiv Oblast following the Russian withdrawal from the region in September.[2] Russian milbloggers have also intensified their calls for Russia to regain liberated territories in Kharkiv Oblast on November 22, stating that such preemptive measures will stop Ukrainians from carrying out assault operations in the Kupyansk and Vovchansk directions.[3] Belgorod Oblast Governor Vyacheslav Gladkov also published footage showcasing the construction of the Zasechnaya Line fortifications on the Ukraine-Belgorod Oblast border.[4] Wagner Group financier Yevgeniy Prigozhin clarified that Wagner is building the Zasechnaya Line after having changed its name from Wagner Line because “many people in [Russia] do not like the activity of private military company Wagner.”[5] Private military companies are illegal in Russia.

Russian claims of an imminent Ukrainian attack on Belgorod Oblast are absurd and only aim to scare the general public to support the war. Ukraine has no strategic interest in invading Russia and no ability to do so at such a scale. Ukrainian forces are continuing to liberate occupied settlements in western Luhansk Oblast following their victory in northern Kharkiv Oblast.[6] Support for Russia’s nonsensical invasion is declining among Russian residents of border regions and the rest of the country as a result of mobilization and military failures. Russian opposition outlets reported that relatives of mobilized men have ignited protests in 15 Russian regions since the end of October, with the most notable ones taking place in regions bordering Ukraine.[7] A Russian opposition outlet, Meduza, citing two unnamed sources close to the Kremlin, reported that the Russian Presidential Administration carried out an internal survey in different regions where many expressed apathy toward the war.[8] While ISW cannot independently verify Meduza’s report, emerging calls for demobilization among relatives of mobilized men suggest that Russian propaganda is ineffective in countering the real-life consequences of the war on the society.[9]

These ridiculous speculations about a fantastical Ukrainian invasion of Russia may also be part of the Kremlin’s effort to acknowledge and appease the Russian pro-war nationalist community. Russian milbloggers have repeatedly accused the Kremlin and the Russian Ministry of Defense (MoD) of failing to defend Russia, including the newly annexed territories.[10] The Kremlin, however, will unlikely be able to reinvade Kharkiv Oblast as demanded by these nationalist figures.

Prigozhin is also using fearmongering about a fictitious Ukrainian invasion threat and the construction of the Zasechnaya Line to solidify his power in Russian border regions and Russia. Belgorod Oblast officials previously halted the construction of the Wagner Line, and the line’s rebranding alongside other Prigozhin projects in St. Petersburg and Kursk Oblast signifies that he will continue to establish himself in Russia while ostensibly supporting Russian President Vladimir Putin’s war.[11]

Ukrenergo head Volodymyr Kudrytsky stated on November 22 that Russian forces have damaged almost all thermal power plants, large hydropower plants, and Ukrenergo hub substations in Ukraine.[14] Ukrainian Prime Minister Denys Shmyhal stated on November 18 that more than half of the Ukrainian power grid has failed as a result of Russian missile strikes.[15] DTEK CEO Maxim Tymchenko urged Ukrainians to leave the country, if possible, on November 19 to ease demand on the Ukrainian power grid, and YASNO CEO Serhiy Kovalenko stated on November 21 that regular power outages will likely last at least until the end of March 2023.[16] Russian forces will likely be able to continue to reduce the overall capacity of Ukrainian critical infrastructure in the near term given the current state of the Ukrainian power grid. The depletion of the Russian military’s high-precision missile arsenal will likely prevent it from conducting missile strikes at a high pace, however. ISW continues to assess that the Russian military will fail to achieve its goal of degrading the Ukrainian will to fight through its coordinated campaign against Ukrainian infrastructure.

The Russian military is likely experiencing problems in replenishing its arsenal of high-precision weapons systems. Ukrainian Air Force Command spokesperson Yuriy Ignat stated on November 21 that Russia is experiencing problems with the supply of Iranian missiles to the Russian Federation.[17] Ignat speculated that diplomatic resources, negotiations, or other countries’ influence may have impacted Iran’s ability or willingness to supply Russia with ballistic missiles.[18] ISW has previously assessed that Russia is increasingly dependent on Iran for the provision of high-precision weapons systems.[19] Ignat also reported that Russia lacks the necessary components produced abroad to support the manufacturing of the number of missiles it needs for its campaign against Ukrainian infrastructure.[20] Reznikov stated that Russia manufactured 120 Kalibr and Kh-101 missiles and 360 Kh-35 missiles since February 2022, allowing the Russian military to partially offset the heavy use of these weapons systems in massive strikes on Ukrainian infrastructure.[21] Russia likely significantly strained the existing capacity of its military industry in producing these missiles.

Russian military movements suggest that Russian forces are likely reinforcing positions in eastern Zaporizhia and western Donetsk oblasts. The Ukrainian General Staff reported on November 22 that Chechen and Wagner Group formations deployed to Debaltseve, Donetsk Oblast, and that Russian forces are regrouping individual units in the area of Molchansk, Zaporizhia Oblast (just northeast of Melitopol).[24] Social media sources posted images on November 21 showing Russian trucks and vehicles in Melitopol moving from the south to the north throughout November.[25] Geolocated images show Russian military vehicles moving through Bezimenne and Mariupol in Donetsk Oblast carrying a notable amount of military equipment.[26] ISW has previously assessed that Russian forces have begun reinforcing positions in eastern Zaporizhia Oblast with personnel from Kherson Oblast and mobilized personnel.[27] Russian forces may be reinforcing positions in eastern Zaporizhia and western Donetsk oblasts to prepare for perceived threats of future Ukrainian operations or to support the effort to restart the Donetsk offensive. 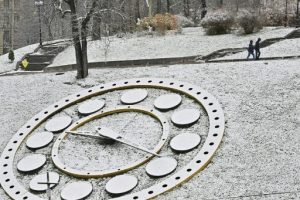