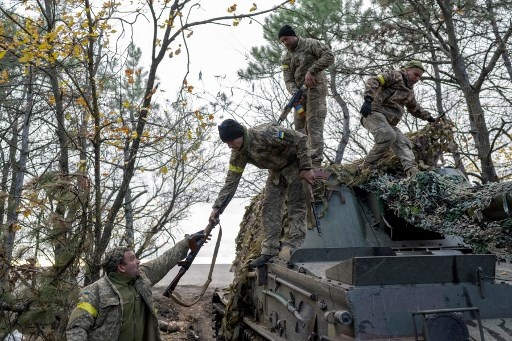 
Moscow announced Thursday, Nov. 10,  it had begun retreating from Ukraine’s southern city of Kherson as Kyiv said it had recaptured a dozen villages in the strategic Black Sea region.

“The Russian troop units are manoeuvring to prepared position on the left bank of the Dnipro river in strict accordance with the approved plan,” the Russian defense ministry said.

Ukrainian officials have remained wary since Moscow signaled late Wednesday that it would pull forces from the west bank of the Dnipro river in Kherson, in what would be major Russian setback in a region Vladimir Putin claimed to have annexed.

Ukrainian troops have for weeks been capturing villages en route to the main city in the eponymous region, while Kremlin-installed leaders in Kherson have been pulling out civilians in what Kyiv has called illegal deportations.

Ukrainian general Valeriy Zaluzhny said on social media that Ukraine’s forces had recaptured six settlements after fighting near the Petropavlivka-Novoraisk front.
Kyiv’s army had taken another six in the Pervomaiske-Kherson direction, capturing a total of more than 200 square kilometres (77 square miles) from the Russians, he added.

Late Wednesday, Russia’s most senior defense officials responsible for Ukraine announced in a televised meeting that they had taken the “difficult decision” to withdraw from Kherson and set up defensive lines further back.

In the nearby southern city of Mykolaiv, which Russian forces have pounded with artillery and missiles for months, there was little belief the Russians would do as they said.

“How you can you trust a thing they say?” driver Volodymyr Vypritskiy demanded in between stalls selling vegetables and winter hats.

“How can you trust people that always told us they were our brothers? People who start killing their brothers — can you really believe them?” the 55-year-old asked.
Ukrainian President Volodymyr Zelensky has suggested Russia could be strategically feigning rather than experiencing a major setback.

Military officials in Kyiv reiterated that caution on Thursday.

“At this point, we can’t confirm or deny information about the retreat of Russian troops from Kherson,” said Oleksiy Hromov, from the Ukrainian armed forces’ general staff.

Russia losing the Kherson region would return to Ukraine important access to the Sea of Azov and leave Putin with little to show from a campaign that has turned him into a pariah in Western eyes.

The retreat will put pressure on Russian control of the rest of the Kherson region, which forms a land bridge from Russia to Crimea, the peninsula that Moscow annexed in 2014.

In the weeks leading up to the announcement from Russian Defence Minister Sergei Shoigu, Kremlin-installed officials said they were “evacuating” civilians and rendering the city a “fortress”.

As Ukrainian troops advance in the south, Russia’s commander in Ukraine, Sergei Surovikin, told Shoigu on Wednesday that around 115,000 people had been removed from the western bank of the Dnipro, which includes Kherson city.

Kherson was one of four Ukrainian regions that Russia declared it had annexed in September, shortly after being forced to withdraw from swathes of territory in the northeastern Kharkiv region.

In Moscow, Kremlin supporters rushed to justify the decision despite earlier setbacks in Ukraine spurring division and soul searching among Putin allies.

The head of Russian state media group RT, Margarita Simonyan, said the retreat was necessary to not leave Russian troops exposed on the west bank of the Dnipro River and “open the way to Crimea”.

Moscow’s announced withdrawal came as the United States estimated more than 100,000 Russian military personnel have been killed or wounded in Ukraine.

Kyiv’s forces have likely suffered similar casualties, according to top US General Mark Milley, who shared the most precise figures released to date by Washington.

Russia has been pushing to capture the eastern Donbas city of Bakhmut, with the battered town famous for wine and salt mines coming under intensive fire for weeks.

“It has become harder these past three days. The Russians are pushing more and more. But our boys are holding their positions,” 26-year-old soldier Vitaliy told AFP in Bakhmut.

Around half of the 70,000 people living in the city have stayed despite the fighting, mostly in the east of the city, for the past four months.

But meanwhile in the neighboring region of Luhansk, Kyiv’s troops advanced “up to 2 kilometres (1.2 miles) in the past day,” Hromov said. Next post Nuclear and radiation challenges – what is Georgia ready for?
iadmin