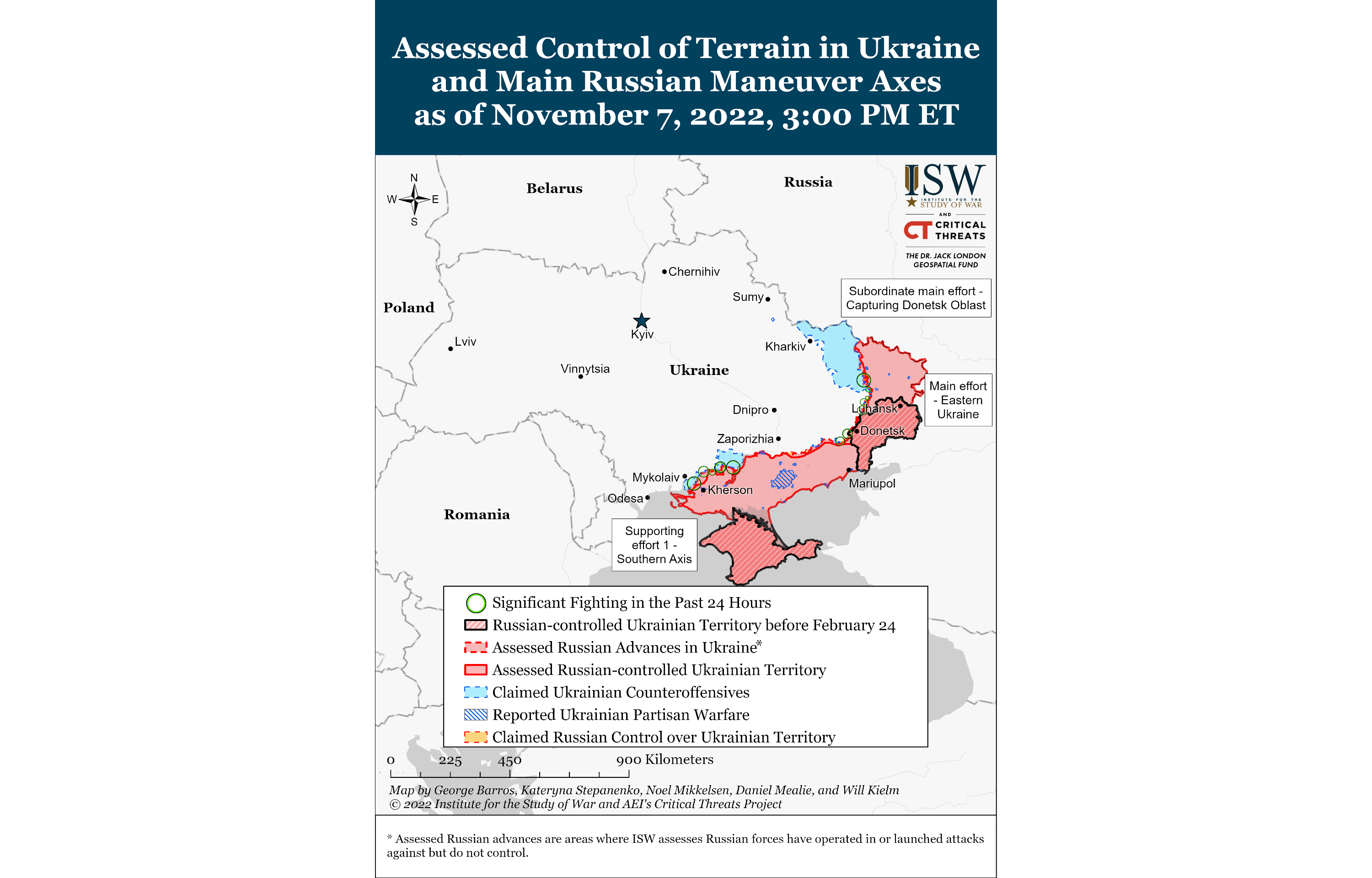 The Russian Ministry of Defense (MoD) issued a rare statement on November 7 in response to extensive Russian milblogger outcry on November 6 about reported extensive losses and poor command within the 155th Naval Infantry Brigade of the Pacific Fleet. Russian milbloggers published and circulated a letter that claimed Russian military leadership “threw” the brigade into an “incomprehensible offensive” near Pavlivka, Donetsk Oblast, where it suffered losses amounting to over 300 killed, wounded, and missing and lost half of its equipment, all within four days. The letter explicitly blamed Eastern Military District Commander Lieutenant General Rustam Muradov, 155th Naval Infantry Brigade Commander Colonel Zurab Akhmedov, and Russian Chief of the General Staff Valery Gerasimov for the brigade’s losses and called on Primorsky Krai Governor Oleg Kozhemyako to conduct an independent review of the actions of the officers involved in planning and conducting the recent Russian offensive push in western Donetsk Oblast.[1] The tone of many Russian milblogger responses to the letter resembles the response following the destruction of a Russian motorized rifle brigade crossing the SIverskyi Donets River on May 11, after which many pro-war milbloggers increased their direct criticism of the Russian military.[2]

The Russian MoD issued a rare response on November 7 to the outcry on and claimed that less than one percent of the brigade was killed and less than seven percent was wounded within the past 10 days, and that Ukrainian forces suffered high losses instead.[3] Kozhemyako also sought to address the outcry and claimed that the brigade’s losses are greatly exaggerated and (without providing evidence) speculated that the letter was a product of Ukrainian special services.[4] Kozhemyako stated that he contacted the brigade’s command and referred the case to the Russian military prosecutor.[5] Some Russian milbloggers agreed, claiming that Russian losses could not be as high as the brigade claimed, even calling the brigade’s letter exaggerated or fake.[6] The Russian MoD has remained remarkably tight-lipped about milblogger critiques of Russian failures throughout the war in Ukraine — unlike the Kremlin, which will occasionally indirectly address milblogger narratives. The MoD’s public response to milblogger outcry indicates that some Russian milbloggers have considerable leverage to shape MoD interactions in the information space and additionally suggests that the situation in Pavlivka is dire enough to warrant a response.

Discourse regarding the widespread failures of the Russian military establishment has pervaded beyond the milblogger information space and is increasingly coloring social dynamics. Russian milbloggers stated that women, presumably relatives of Russian military and mobilized personnel, have been calling attention to the failing state of the war by reaching out to milbloggers and local government officials.[7] ISW has observed multiple instances of Russian military personnel’s wives and mothers advocating for their relatives serving in the military by reaching out to local officials and prominent Russian milbloggers since the beginning of partial mobilization in late September.[8] The Russian MoD’s failure to properly address these systemic issues and their root causes will likely exacerbate these societal tensions throughout the war.

The Russian pro-war siloviki faction is increasing its influence in part to advance personal interests in Russia and occupied Ukraine, not strictly to win the war. Wagner Group financier Yevgeny Prigozhin confirmed on November 6 that Wagner is opening training and management centers for people’s militias in Kursk and Belgorod oblasts that will function outside of the Russian Armed Forces.[9] ISW previously assessed that Prigozhin is undertaking efforts to strengthen his independent power base following his reported meeting with Kursk Oblast businessmen on the creation of regional people’s militia that symbolically occurred on Russia’s Unity Day (November 4).[10] Prigozhin emphasized that Russian officials must assign regional businesses the responsibility to supply the militia rather than relying on the Kremlin. Prigozhin’s Unity Day media appearances also captured the same notion of cooperation between the Russian government and business, which likely indicates that he is attempting to grow his Wagner-focused power base in Russia while undercutting unified Russian operations in Ukraine. Prigozhin also started construction of an independent fortification dubbed the “Wagner Line” in Belgorod Oblast in late October.[11] Prigozhin consistently defames St. Petersburg Governor Alexander Beglov, and the recent grand opening of the Wagner Center in St. Petersburg on Unity Day may suggest that Prigozhin is attempting to infiltrate the city’s business sphere.[12]

Another member of the siloviki party, Chechen leader Ramzan Kadyrov, is also reportedly attempting to secure business opportunities on the back of the Russian invasion of Ukraine. The Ukrainian Resistance Center noted that Kadyrov and his field commanders are growing business networks in the occupied territories, and Ukrainian officials previously claimed that Kadyrov’s men received loot from Mariupol for their participation in the seizure of the city in March­–April.[13] ISW cannot independently verify the validity of these Ukrainian statements, but Kadyrov is behaving in line with Prigozhin by advertising enlistment into his forces and undermining the formal Russian Armed Forces.[14] Kadyrov, for example, advertised his provision of military equipment to a proxy unit in occupied Donetsk Oblast on November 7; and Prigozhin similarly provided equipment to a Russian unit prior.[15]

Both Prigozhin and Kadyrov remain independent figures within Russia due to Putin’s dependency on their forces in Ukraine. Russian journalists often ask Prigozhin about his ambitions for the Kremlin, which despite his repeated denials, show that he has created a public perception of his possibly entering a position of power.[16] Such discussions deviate from Putin’s decades-long positioning of himself as the only viable leader for Russia. Prigozhin also likely maintains his access to key Kremlin officials, and the Ukrainian Resistance Center even reported that he had an unofficial meeting with Putin’s administration head Anton Vaino.[17] Prigozhin and Vaino allegedly discussed Putin’s negative influence over the Russian military campaign and distaste for Russian higher military command. The existence of this meeting is impossible to confirm in open sources, but Western officials previously confirmed that Prigozhin directly addressed Putin regarding military failures in Ukraine in October.[18]

Prigozhin is continuing to pose himself as a Russian strongman within foreign affairs by promoting his own engagement in election interference. Prigozhin sarcastically acknowledged Bloomberg reports regarding his involvement in the US 2022 midterm elections, telling US government–funded outlet Radio Free Europe/Radio Liberty: “Gentlemen, we interfered, we interfere and we will interfere.”[19] Prigozhin’s admission to a US publication a day prior to US elections on November 8 likely intends both to undermine public perception of the validity of election results and promote Prigozhin to a Russian audience as a capable actor — in line with Prigozhin’s previous public admittance that he finances the Wagner Group, which he previously denied for years.

Russian forces have greatly depleted their arsenal of high-precision weapons systems and have suffered significant aviation losses and will likely struggle to maintain the current pace of the Russian military’s coordinated campaign against Ukrainian critical infrastructure. Commander-in-Chief of the Ukrainian Armed Forces General Valeryi Zaluzhnyi stated on November 3 that Ukrainian forces have destroyed 278 aircraft compared to the Soviet Union’s loss of 119 aircraft during 10 years of war in Afghanistan.[20] The United Kingdom Ministry of Defense (MoD) reported on November 7 that Russian forces are unlikely to replace these aviation losses in the next few months because they likely significantly outstrip Russian capacity to manufacture new airframes.[21] Ukrainian Main Intelligence Directorate (GUR) representative Vadym Skitbitsky stated in a comment to the Economist on November 7 that Russian forces have used more than eighty percent of their modern missiles in the coordinated campaign to strike Ukrainian infrastructure and that Russian forces only have 120 Iskander missiles left.[22] ISW previously assessed that Russia has depleted its arsenal of high-precision weapon systems in its campaign against Ukrainian critical infrastructure, which is intended to degrade Ukrainian popular will (but is highly unlikely to succeed).[23] Ukrainian sources reported on November 7 that Ukrainian officials and engineers could restore power supplies to normal levels in a few weeks if the pace of Russian strikes on critical infrastructure dramatically slowed.[24] Skitbitsky also reported that Russian officials have reached an agreement with Iranian officials to purchase Fateh-110 and Zolfaghar ballistic missile systems.[25] ISW has previously assessed that Russian forces are increasingly reliant on Iranian-made weapon systems to support its coordinated strike campaign against Ukrainian critical infrastructure.[26]

Russian occupation authorities are likely beginning a new phase of evacuations from Kherson Oblast. Kherson occupation deputy Kirill Stremousov stated that November 7 will be the last day of organized evacuations from the west bank of the Dnipro River.[27] A Russian milblogger similarly noted that November 7 is the end of centralized evacuations in Kherson Oblast and that private evacuates will continue from November 8.[28] Russian sources reported that the last boat transporting civilians from Kherson City to the east bank of the Dnipro departed on November 8 due to concerns of “increased threats to the civilian population.”[29] The purported shift from centralized to privatized evacuation efforts suggests that Russian occupation officials have completed evacuation under formal guidelines and will increasingly continue evacuations from areas in Kherson Oblast on a more ad hoc and case-by-case basis. Russian officials may also be setting further information conditions to accuse Ukrainian forces of endangering civilian life by framing the end of centralized, administration-led evacuations as necessary to protect civilians. 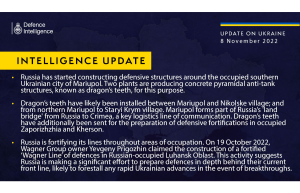 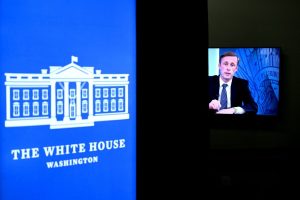