Most of the population of Georgia believes that the country is moving in the wrong direction – the data of a survey conducted in the fall of 2022 were distributed by the International Republican Institute (IRI).

30% of survey participants believe that the country is moving in the right direction. In the wrong one – 62%. 8% answered “I don’t know”.

Most of all in Georgia, they believed that the country was moving in the right direction in February 2013, after the change of power in the country, when the Georgian Dream became the ruling party. At that time, 57% of the respondents gave a positive answer to the question. This indicator was the lowest in March 2016 – 16%.

Optimists and pessimists
47% of survey participants believe in a better future and evaluate it as optimistic expectations of change. 38% are neutral and apathetic, while 15% look to the future with fear and anxiety.

The highest indicator of optimistic expectations was in Georgia at the end of 2012-beginning of 2013. Now it is the lowest in the last ten years.

2% of respondents characterize the current economic situation for their families as “very good”. As “relatively good” – 48%.

Up to 16% of respondents called the economic situation of their families “very bad”, 35% – “relatively bad”.

These indicators have improved compared to previous years – for example, in the summer of 2020, 22% spoke of a very poor situation for families, and 43% – relatively poor.

1% believe that in general the economic situation in the country has changed dramatically for the better, and 12% think that it has “improved relatively”.

At the same time, the number of those who believe that the situation has “improved relatively” is more than twice as large as in March of this year, then only 5% said this.

But the majority still give a negative assessment: 31% say that the situation has “deteriorated greatly”, 30% – “relatively worsened”. 26% believe that there were no significant changes during the year.

Unemployment continues to lead the list of problems that the residents of Georgia name. 41% put it in first place, 58% – in second.

Foreign conflicts and war outside of Georgia were named the most important problem by 5% of respondents, internal ethnic and religious conflicts – by 2%.

There are a huge number of problems on the list, from medical and health problems, but the votes were further divided, and they all ended up with less than 3%.

First of all, Georgia needs to solve the problem of economic development, according to 37% of respondents. The restoration of territorial integrity was ranked first by every fifth respondent. Fulfillment of the conditions of the association agreement between Georgia and the EU was ranked first by 6%. 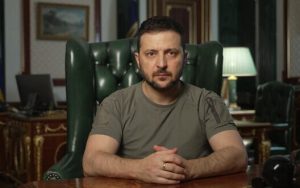 Previous post Russia’s escalation of missile and drone terror has led to increase in assistance to Ukraine, – Zelensky. VIDEO

Next post Explosions rang out near city of Kremenchuk
iadmin