Russia’s military is preparing for a knock-down, drag-out battle for Kherson city and the territory around it, but the devil will be in the detail.

Military analysts say that much of what is left of the regular Russian army is now concentrated in defenses around Kherson. According to Yury Butusov, a high-profile Ukrainian war correspondent, what remains of the “best formations” of Russia’s military are arrayed in a fortified bridgehead around the city some 50 kilometers deep.

According to analysts and direct accounts to Kyiv Post by two Armed Forces of Ukraine (AFU) soldiers serving in the Kherson sector, Russian defenses are forming a second main battle line with major entrenchments and heavy weapons, and a third line of mobile reserves.

Pioneered by Kyiv’s forces in the fighting in Donbas in 2014-2021, and using modern drones and precision-guided munitions, the defense strategy aims to use space and rapidly responding reserves to contain an attack, and then to destroy it with artillery.

The tactical counter – a massive combined arms attack overwhelming a wide swath of the defensive belt and penetrating through it at speed – was executed successfully by the AFU in the Kharkiv sector in September, but against a Russian defensive line manned mostly by untrained local militia, lacking mobile reserves, and in a countryside overwhelmingly inhabited by civilians hostile to Russian invaders.

In the Kherson sector in early November, evidence has been piling up that Russians in Kherson intend not to repeat their past error, and instead hope to force Ukrainian attackers to take bloody losses fighting house-to-house in dozens of towns and villages. Then, the enemy plans for an enclosed battle in Kherson city itself, against Russia’s best infantry.

Kremlin authorities in late October announced a “voluntary” evacuation of civilians from the city and villages around it. By Nov. 2, they announced 60,000 people had crossed the Dnipro River by bridge or ferry and made their way to the left bank. Spun by Russian Federation associated officials as an effort to protect the lives of civilians, the sometimes-forced evacuations were widely seen as a Russian move to prevent Kherson’s mostly Kyiv-loyal population from informing the AFU of locations and movements of Russian military units.

Full lockdown and martial law went into effect in Kherson and surrounding localities on Nov. 3. The instruction gives police patrols the authority to detain and question anyone, dramatically widen rights of arrest, and shoot saboteurs and looters on sight, according to statements by the Kherson occupation authority. Civilians are subject to identification checks at any time, and may not move about the city during nighttime hours

Another instruction banned civilians from crossing the river by any means, or even going fishing. Boat owners were ordered to remove all water craft from the Dnipro River banks, and on Nov. 3 police enforced the rule by sinking even rowboats and resort craft still tied up along piers.

Ukrainian independent media, citing testimony by Russian Prisoners Of War (POWs) and deserters in the Kherson sector, pointed to another possible reason for the crack down: the Russian army leadership want to use the Dnipro River as an impassible barrier to recently-mobilized troops looking to sneak back into Russia.

Kyrylo Budanov, head of Ukrainian army military intelligence, in Oct. 24 comments to Ukrainska Pravda news magazine, pointed out that no-go barriers work in both directions, and suggested that the Kremlin think twice about attempting to hold Kherson long-term. This is on the basis of advancing Ukrainian units being close to completely cutting off Russian units on the right bank of the river from their supply.

“It can’t be said that they are fleeing from Kherson city right now,” Budanov said. “But they are getting ready.”

Prospects for a Russian retreat

The trigger point for a Russian evacuation, he said, would be the close approach by AFU troops to a hydroelectric station crossing the Dnipro near the city Nova Kakhovka. Were that escape route to be closed, Russian units on the right bank of the river would be effectively trapped. Forced evacuations of civilians living in the area, enforced by Russian Federation military police, were reported on Nov. 3.

Ukraine’s Defense Minister Oleksiy Reznikov said in Nov. 4 comments that a wholesale Russian retreat from Kherson’s fortifications is a move the Kremlin “is potentially ready for…their standard operating procedure [to retreat] is well known to us.”

“They [the AFU] have f***ing amazing artillery – it is f***ing overwhelming. It blows the BTRs [armored personnel carriers] in half, and our [artillery] can’t ****ing shoot straight,” a Russian Federation soldier told a relative in an intercept published by Ukraine’s national intelligence agency the SBU on Nov. 3.

Ukraine’s Joint Command South, in a statement on Nov. 4, said that its cannon, mortars and artillery rockets had executed more than 170 fire missions in the Kherson sector, destroying anti-aircraft systems, tanks and automobiles, and killing more than 30 Russian soldiers in 24 hours.

At a severe disadvantage to Russian artillery in the early days of the war, the AFU, now equipped with NATO state-delivered howitzers and precision-guided artillery rockets, have a much better range and are more accurate than Russian army systems.

Combat companies of 150 men have, the soldier said, shrunk to 45 members or less from continuous Ukrainian artillery fire. 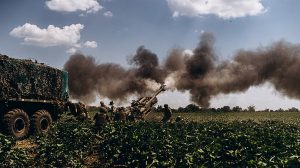